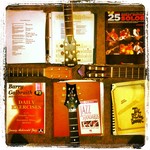 If you guys are anything like me, then you probably struggle to maintain consistent practice habits.  A recap of a typical week of practice may go something like this:

Today I played for three hours but yesterday and Thursday I didn’t play at all. Monday I had a long rehearsal with my band. Sunday I played for fifteen minutes before becoming distracted by chores.  You should have seen me last Friday, though, I played for five hours straight.

I often think that if I could just buckle down and maintain a consistent practice schedule then I wouldn’t have to “cram for the final” when I’m preparing for gigs or for recording sessions.

The woodshed is the price I’ve paid for this disorganization.

Although protracted and intense practice sessions (like those of the woodshed) are a necessary part of a musician’s life, consistent, day-to-day practice trumps periodic marathon sessions in productivity and in overall value.

This advice, of course, is so obvious as to not merit any further commentary. It’s like I’m saying to an overweight person, “if you want to lose weight, then just eat less and exercise daily.”

Well, no shit—everyone knows that.  But there’s a devil in the details: everyday life and its distractions can thwart the consistency that is needed for the musical learning process. The endeavor to practice daily, although painfully simple in theory, remains elusively complex in practice.

So, how does one remediate distraction, make progress, and remain safely outside the woodshed?  I believe I know the answer to this question:

Welcome to my two-step program for musician recovery.  You don’t even need a sponsor. The only thing you need is a desire to buckle down and a desire to do things in a more productive fashion.  You’re even allowed to have a drink or two on the way.

Let’s start with step one—establishing goals.  You should think long and hard about what kind of musician you want to be and about what kind of skills you’ll need to be that musician. Here are some prototype musicians along with their prototype skill sets. Figure out which one fits you closest:

To become one of these musicians, you’ll probably want to establish goals such as these:

Okay, now on to step two of my two step system—organizing your practice. Whatever your goals are, you should know that most goal-oriented musicians organize their strategy in the following ways:

To make practice a priority you must be proactive about time management in general. Try using a calendar.  Gmail and other email services now have an impressive array of organizing tools, one of which is a calendar.  Start using your email calendar and schedule your practice like the priority that it is.

Organizing materials is a must.  Put all that you are working on into a single binder or into a single computer file, then make the bundle logically cohere with your goals. For example, if you are a college student focused on pedagogy and rudiments, try putting your binder together in this order: warm-up materials first, scale studies second, sight reading studies third, and repertoire last.  If, on the other hand, you are working musician with paying gigs, your binder might be organized into various sets such as your cover set, your original set, and your wedding set.

You may need more than one binder.

Program your time.  Say you have an hour to practice, take ten minutes to warm up, ten minutes to read something new, and forty minutes to practice repertoire.  If you need more time with scales and less with your set, then flip the script.  Try to recognize where your weakness are and attack those musical vulnerabilities relentlessly.

A growing awareness of yourself and your limitations is a part of the maturing process. Try to have an object view of reality, especially if you begin hearing commentary such as the following:

Really, you’re going to be the lead singer of a band in six months? But dude, you’re now just learning Jingle Bells.

Dang dude, are really trying out for the lead guitar slot in that new eighties cover band? Didn’t you just spend the last three months trying to learn the solo to My Sherona?

Dude, I’m not sure that Paganini is the right composer to conquer right out of the gate. Hey, remember, you own me on Monday for your first month of lessons.

Another rookie mistake that is common is the tendency to have delusions of future-practicing grandeur.  The voice inside your head may be saying, “I’m going to buy that Strat, take it home, lock myself in the basement , and not come out until I can play all of Stevie Ray Vaughan’s first album.”

Really, you’re just going to buy that Stratocaster and then learn the whole Texas Flood album?  I’m sorry, man.  That’s just not going to happen. You may, however, be stricken with Music Future Megalomania—MFM.  By the way, do you know that the tooth fairy wasn’t real?  Yeah, that was just your mom.

How about a more realistic version?  “I’m going to buy that Strat, take it home, and teach myself to play the I, IV, and V chords. Then I’m going to practice thoughtfully, in an organized way, and allow myself to develop naturally as a musician.”

There you go.  Doesn’t reality have a nice ring to it?

So, here is the thesis of this blog post with all the concision I can muster:

Know what you want to do musically and establish some realistic goals.  Devise, and stick to, a practice regimen that incrementally chips away at those goals.

Sounds easy, right? Right. So, what do you want to do musically?

Inside you’ll find protracted suffering and delayed progress.  Fight the tyranny with an organized mind, and I’ll do my best to battle on with you.  Glory and honor will be ours.