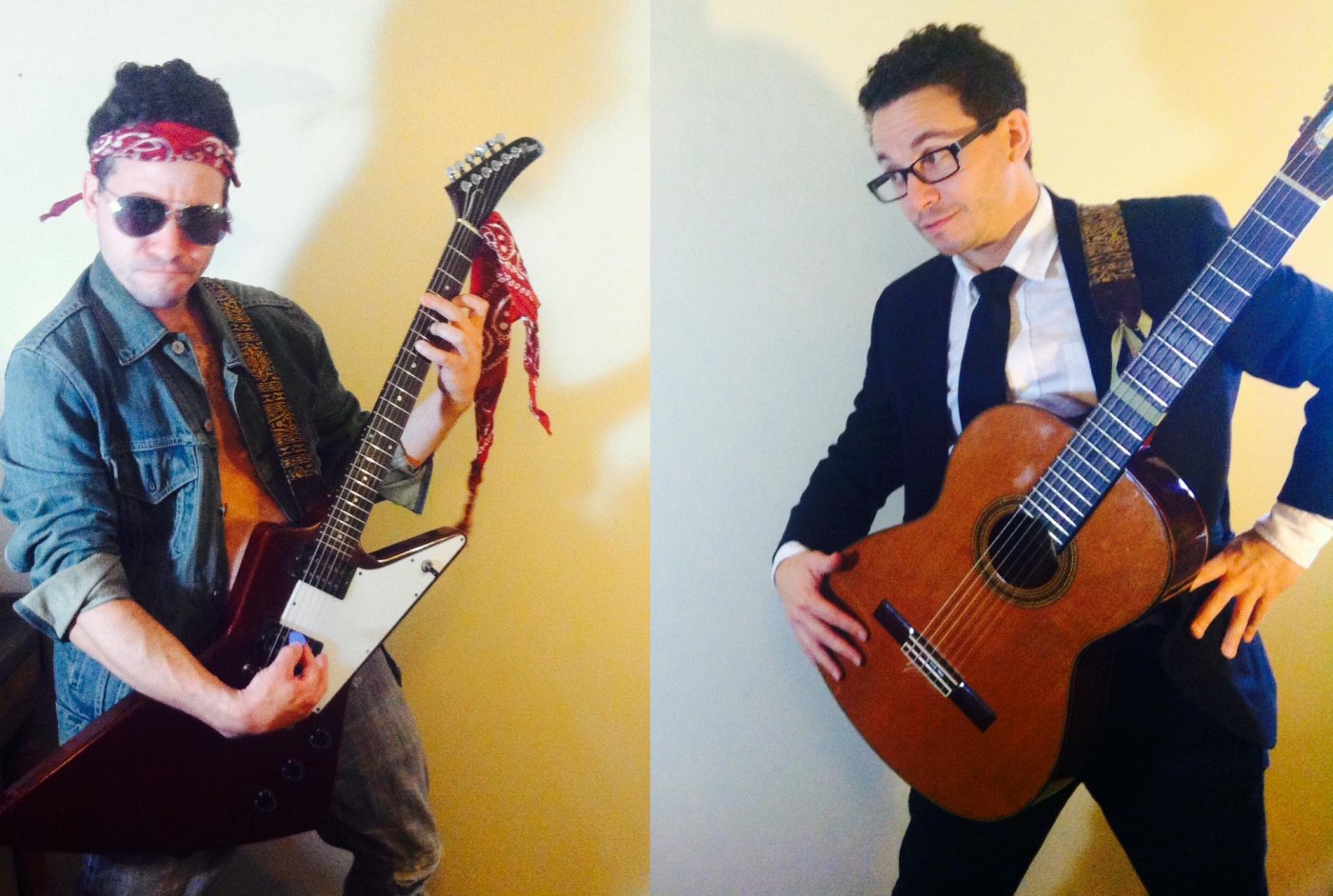 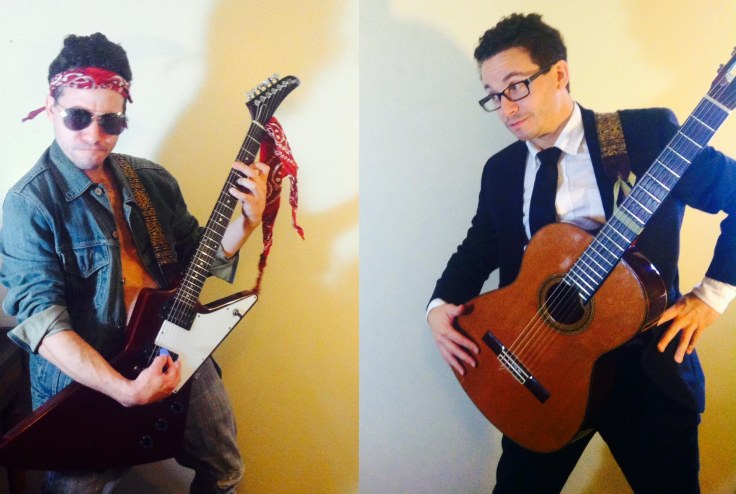 Self-doubt, like an invasive plant species, has the habit of taking over the wilderness of one’s thoughts.  This is especially true when considering professional choices.

For this month’s blog post, I imagined a conversation between two versions of myself: Me and Other Me.  In the post, “we” take turns telling autobiographical stories about doubt in professional life. I hope you like it; it’s a little weird, but I mean for it to be funny.

In my opinion, doubt is heavy and laughter is the best crane.

Other Me: Okay, where should we begin?

Me: Let’s do some dark introspection to get things started.

Other Me: Sounds good; go for it.

Me: I’m all alone on my way to Wheeling, West Virginia when I realize that maybe I’ve made a few wrong turns. Not ones on this particular trip, of course, I’ve gigged in Wheeling plenty of times, but ones I’ve made throughout my life.

Should I have pursued music with the desperate ferocity that has marked my trip from college music student to professional musician about to play a shitty gig to a bar full of idiots?

My answer is, probably not.

Other Me: Is that the end, then?

Other Me: Pretty weak, bro.  I don’t see why a bar full of idiots would derail your artistic passion.

Me: Okay, okay. How about the same idea in the third person?

Me: A middle-aged man sits alone in a shitty apartment learning the guitar solo to Free Bird when he is suddenly struck by the notion that maybe he’s made a few unwise choices professionally…

Me: Just shut up and listen, man.

…setting his well-worn guitar to the side, he walks over to the window and glances at the urban landscape: a car park filled with shitty cars, a beat down playground and basketball court, a monstrosity sized factory building housing a storage facility.

Surveying this with a sigh, he turns, straps the guitar back on, and returns to the Skynyrd solo.

The air is filled with the same tired licks that have seemingly always surrounded him.  He, and his licks, are unexceptional in every way: brown hair, pentatonic bends; cheap clothes, budget-minded instruments; deepening lines and pronounced facial imperfections, beat frets and a cracked top.

His life is filled with brilliant volume, endless rehearsal, and low wages. And for what? Why has he set his life up in such a way?

Here’s the answer: The man was once a directionless teenager who found pleasure in discovering that he had an aptitude for coercing musical sounds from the strings of a guitar. As a kid, he could fucking destroy shit with his playing and now he’s a pro.

Other Me: That’s it, then? He could destroy shit as a kid, and now he’s a pro? You kind of lost the doubt angle there, chief.

Me: Yeah, I guess I need to work on the ending.

Other Me: That’s not all you need to work on.

Other Me: Fine, try this doubt on for size:

For months little Bethany’s parents have faithfully brought her to lessons week after week. Their intentions are good; a directed pursuit like learning an instrument is just what precocious Bethany needs to excel in life. The problem is, little Bethany did not get the memo.

She never practices, she is unable, or (more likely) unwilling to grasp any of the learning activities I have her do. And now she is crying. She’s crying because I am making her play and say the note names to Ode To Joy.

We’ve been working on this little song for weeks but she still can’t do it. She refuses to apply herself. She is not dyslexic and she does not have special needs. To her, I must be rallied against and fought at all and any cost. It’s tears this time but often it’s just plain obstreperousness.

I need the money but I am not willing to put myself through this for so little. I will not bend to the selfish, bratty behavior of an 11-year-old that doesn’t belong to me. Especially for a $15 lesson.

“Bethany,” I say, “I know it’s hard. Anything that is worthwhile in life is hard.”

Bethany says nothing to me in return.  She just stares forward with her cheeks streaked with tears.

She leaves, glad to be rid of me and my annoying questions about notes. Teaching encounters of this sort make me want to whack myself in the face with a shovel.

I should have been an accountant.

Me: Shit, man.  That’s some serious doubt right there. Maybe you should have tried to do different things in every lesson. You know, show her the intro to Crazy Train…

Other Me: Dude! I’m going to find that shovel…

Other Me: Well, shit-for-brains, I do try different things during lessons. It so happens that the crux of learning how to read music is not pretty, it’s extremely hard, and it often requires firm direction.

Me: Alright, man. I never doubt you, I only doubt me.

Other Me: That’s right, I’m always right. You’re the one who’s always wrong.

Me: I thought it was you?

Just then, a man approaches from out of the glare of the sunset. He’s wearing cowboy boots, a Gibson guitar, and sunglasses.

Me: I don’t know but he looks like and angel.

Other Me: Is he a Greek god?

The man stops, swings his guitar from around his back, and begins to play sweet, smooth sounding licks. His playing is technically brilliant and musically stimulating.

Me and Other Me: Whoa!

Finishing his performance, the man swings his guitar back around his back and removes his sunglasses.

ANOTHER ME: What the hell are you two pussies blathering about?

Me: Ah, you know, doubt, career choices, and stuff. Who the hell are you?

ANOTHER ME: I’m you–I’m an idealized, slightly taller, more handsome, talented, and confident version of you two assholes.

Other Me: Dude, you’re kind of harsh.

ANOTHER ME: Well, someone needs to stop all the whining and complaining before the Red Cross shows up. Jesus, men, have you stopped for a second and listened to yourselves? You sound like a couple of tsunami refugees.

Me: Just take it easy, man.

Other Me: What’s a tsunami?

ANOTHER ME: Never mind, you guys need to stop your complaining for a second and take in some big picture thoughts. Have you considered the fact that neither of you guys has anything resembling a boss or that people give you money to play guitar solos? Do you know how many people spend a third of their waking hours penned off in cubicles. Have either of you guys ever even seen a cubicle?

Me: I read about one once.

Other Me: What’s a boss?

ANOTHER ME: Exactly. Why don’t you guys tell me about your commute?

Other Me: I wake up mid-morning every day and go for a bike ride to the community college.

ANOTHER ME: You know that that’s what people do on vacation, right?

Other Me: Yeah, but, I don’t make much money. And being a teacher is hard work.

ANOTHER ME: I know it’s hard. But anything that’s worthwhile in life is hard. Didn’t I just overhear one of you guys saying something like that? If you want success, you just need to work a little harder and take stock of what you’ve already accomplished. If you ask me, I think you’re doing okay.

Me and Other Me: Thanks, Brometheus.

I hope you enjoyed my schizophrenic, Socratic dialogue on doubt. I’m sorry that it didn’t go anywhere and that I don’t have some kind of prophylactic summary.

Doubt is a natural part of life and it must be handled in ways that make sense to the individual. Writing this weird-ass blog post about the subject was what made sense to me.

What makes sense to you? Let me know, and keep chasing them chords. After all, there’s no reason to doubt that we’ll ever live in a world without music. And until there are artificially intelligent robots, humanity is going to go on needing musicians.

I have no doubt that I am a musician.

2 thoughts on “Doubting Myself: A Socratic Dialogue”

My Tweets
Join 958 other subscribers