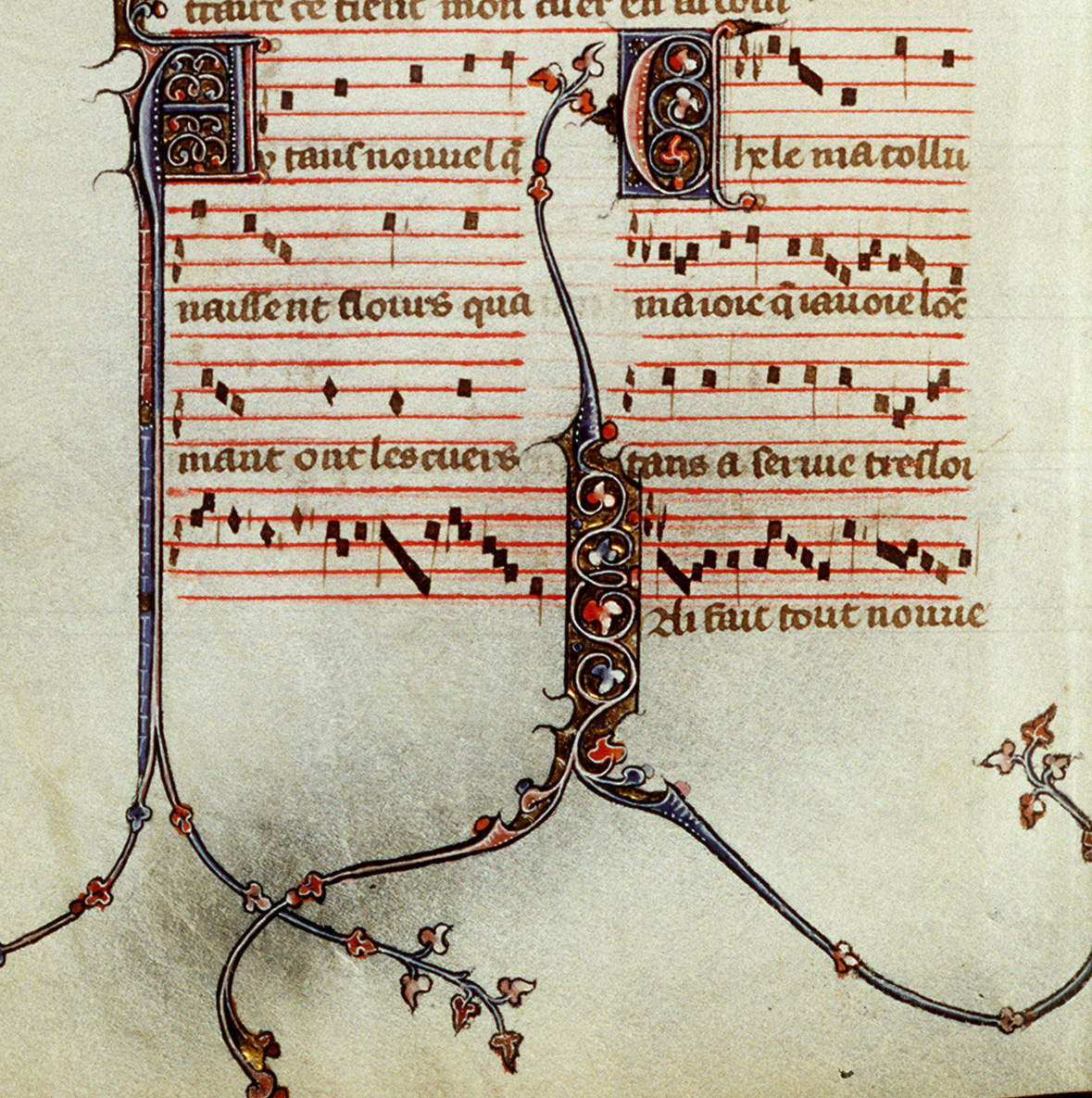 The advancements in polyphony made at the Notre Dame Cathedral School proceeded without interruption through the thirteenth century. The music being composed there, known as organum, changed slowly over time into a new form—the motet.

Because the motet admitted to near-limitless melodic possibilities, a new form of rhythmic notation developed to accommodate it—mensural notation.

Strangely, the new style and the new rhythms were used to sing sacred and secular songs alike. In fact, the motet was used for hymns, masses, love songs, ceremony songs, banquet songs, and many other forms (Hughes 353).

The new styles and developments of this period inaugurated an interesting shift in artistic awareness. The artists and musicians of the 1300s knew that they were being innovative instead of simply maintaining tradition.

They even devised a name for it, the ars nova, the “new art.”

The primary showpiece of the new art, both sacred and secular, was the motet. Emerging sometime in the mid-thirteenth century, it evolved from a method used for organum known as substitute clausula.

Motets expanded on this idea by introducing words to the melodic flourishes. This means that the melodic fragments, typically treated with monosyllabic melismas in organum, were now treated with text (Taruskin 209).

In fact, the word motet is derived from the French word, mot, which means “word.” So, it’s basically like calling this music a wordy (Hughes 353).

It is important to remember that the technique of adding words to melodic flourishes has its precedent in the sequence, which was a sort of trope constructed by prosulating melismas. Prosulating, you’ll remember, means affixing newly written liturgical words to melismas and neumatic phrases to create a trope. (The concept was covered in Lecture 3.)

It was the same maneuver with a motet, it’s just that the newly written words were now affixed above the tenor melody in a way that resulted in more than one set of words happening simultaneously. Usually the tenor was exploded and elongated, just like in organum, and the new words were written for the upper voices.

The lyrics for the motetus were sometimes in Latin and sometimes in the vernacular. This means that some motets featured simultaneous texts in different languages. Furthermore, the new words functioned as a sort of commentary and elaboration on the original text. This made for an intellectually demanding listening experience (Hindley 67).

The motet, Factum est salutare/Dominus, and its counterpart discant clausula, Dominum, illustrate the changeover in style. Notice that each of the two fragments uses the identical melodic material.

The original chant lyric dominus, which means “lord,” was expounded by the motetus lyric, factum est salutare conspectu notum gentium, which means “salvation was made known in the sight of the people.”

Combinatory wordplay, such as the sort sung in Factum est salutare/Dominus, made the motet an art form of near-limitless possibility (Burkholder, Grout, and Palisca 101).

Almost unbelievably, the medieval church composers began affixing a third voice to the motet. This new voice, known as the triplum, also received its own text and its own melody (Hughes 367).

Motets of this variety offered a concatenation of musical sound and lyrical content so dense as to rival the matter found at the heart of a neutron star. To imagine how dense a neutron star is, picture the Earth shrunk down to a sphere that’s about a meter wide. Motets are really dense.

Much to the chagrin of the church fathers, the addition of newly written texts admitted to secular options.

The descent from sacred to profane went as follows: first, motets were strictly religious affairs fit only for performance in the mass; next, motets employed vernacular lyrics that, though still relevant to the original content, were more devotional than religious; last, motets became vehicles for singing about love and sex. Usually, the triplum just vaguely alluded to the original lyrical content (Handley 68).

By the mid-fourteenth century motets of this sort, that is, ones that were only tangentially connected to their source material, were the norm.

It featured three voices singing three different lines of mostly secular text based on courtly love themes, the primary subject matter of the tradition. However, its tenor was derived from the familiar gradual hymn, Viderunt Omnes (Burkholder, Palisca 114).

De ma dame was written sometime between 1260 and 1280, making it one of the earliest permutations of this form (Burkholder and Palisca 114-115).

Below are some of the lyrics and music to this motet. Notice that the tenor is comprised of just one word, Omnes, which means, “all,” and that it functions somewhat like an instrument.

Triplum: “From my lady comes the grievous pain which I bear and of which I will die.”

Motetus: “God, how can I find a way to go to him whose lover I am.”

The secular permutations, such as the ones found in this motet, were adopted by other trouveres and expanded to include instruments.

In the trouvere version, the tenor was played by an instrument such as a viol, hurdy-gurdy or shawm, and the motetus and triplum were sung. The voices usually came in one-at-a-time and the interplay of all three parts was saved until the end (Hindley 68).

Secular motets also inaugurated the use of the cantus firmus, a concept that will play a huge role in the next several centuries. The cantus firmus is the name given to the primary melodic source material, whether it be Gregorian or otherwise. Gregorian sources are usually called tenors in this context (Burkholder, Grout, and Palisca 121).

This is a somewhat confusing idea so, for the sake of clarity, I’ll explain it again: Both words—tenor and cantus firmus—referred to the original melodic material that formed the basis of the new music. This means that Gregorian melodies continued to play a role in composition, but now composers were finding other sources, such as melodies from secular love songs.

The motet and the musical tradition that produced it were ascendent. Now all that was needed was a better way to write it down.

In addition to stylistic advancements, the era of the motet also produced the next advancement in notation. Known as mensural notation, it allowed for more accurate representations of how music sounded in the context of time to be written down—that is, it allowed for more accurate representations of music’s rhythm. Its name, mensural notation, was derived from the Latin mensura, which means “measured” (Taruskin 214).

This development is dated to about the mid-thirteenth century, and it’s coming out party was a treatise written in 1280 by a German chaplain named Franco of Cologne. Historians know next to nothing about Franco other than that he flourished in the mid-thirteenth century and that he wrote a treatise called Ars cantus mensurabalis, “the art of measured song.” In this book, Franco laid out how mensural notation worked (Taruskin 215).

The organizing principle of mensural notation was that note shapes corresponded to specific durations. The most common note shapes were those indicating long and short durations: the virga and the breve respectively. (In some histories the virga is called, the longa, or simply, a long.)

There also existed a subdivision of the breve equal to half its value, and a double long, equal to twice the value of a virga. Various other subdivisions and expansions also exist, as does mechanisms for grouping pockets of two notes and pockets of three notes (Burkholder, Grout, and Palisca 116-117).

Here is a simple chart from The History of Western Music that outlines some of the mensural ideas:

The new idea did not completely displace the ligatures and rhythmic modes of the Notre Dame School, and both conventions continued to be used for a time (Taruskin 214-215).

Nevertheless, the idea of using note shapes to indicate duration eventually supplanted the old convention of rhythmic modes, and mensural notation became the standard during the fourteenth century. 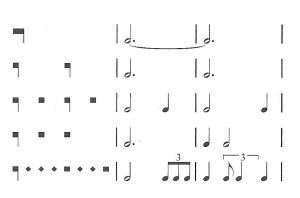 The rhythmic advancement can be seen and heard in most, if not all, the music that is to follow. Indeed, the jaunty and characteristically rhythmic nature of the medieval motet owes its existence to innovations made to the shapes of note heads.

The next step in the evolution of Western music, brought about in part by mensural notation, was the advent of a unifying spirit of the times that the composers called the ars nova, the “new art.”

The Ars nova is the name devised by the musicians to denote the music they produced in the new century, the 1300s. The music of earlier generations, that is, the music produced in the 1200s, became known as ars antiqua, the “ancient art.” (Sadie 35).

One new idea covered by Vitry was that of the isorhythm, which was a repeated pattern that could be displaced, inverted, and varied, to produce a kind of organizing principle for an entire large-scale work, such as a motet (Sadie 866).

One of the more interesting examples of the new art is the Roman de Fauvel, a strange poem about an anthropomorphic horse named Fauvel whose stupidity and moral confusion portend a coming of the antichrist. His name, Fauvel (Favval), is a mnemonic comprised of five moral vices: Flattery, Avarice, Vileness, Variability, Envy, and Laxity (“Roman de Fauvel” para. 5).

One of the existing manuscripts of the Roman de Fauvel was illuminated, that is, illustrated and adorned with pictures and music notation. This copy of the poem has many notated motets, chants, hymns, and chansons interposed onto the poem to function like punctuation or elaboration upon the text (Roman de Fauvel” para. 1-3).

There are 167 such pieces, and many of these are motets—some are imagined to be the work of Philippe de Vitry (Sadie 267).

The most important exponent of the ars nova to come after Philippe de Vitry is poet/composer Guillaume de Machaut—born about 1300 and died in 1377 (Randel 388).

He wrote music and lyrics for nearly every form on offer in the Middle Ages, including the two principal sacred styles—masses and motets—as well as the three principal secular styles: rondeaux, ballades, and virelais (Randel 388).

These secular stylings are known as the fixed forms, or the formes fixes, and can be thought of as the standardized architecture for secular songs. (Burkholder, Grout, and Palisca 124).

Machaut’s notoriety is in part based on his efforts to reinvigorate the knightly poetry made famous by the troubadours and trouveres of a generation earlier. During his lifetime, the tradition was in decline, but his efforts helped to reverse that trend (Taruskin 290).

Indeed, Machaut may be more accurately categorized as a literary figure, alongside the likes of Chaucer and Dante, than as a musical one. (Taruskin 290).

Nevertheless, his contributions to music history are secure, mainly because he is the first composer to construct a fully realized polyphonic mass based on a cantus firmus (Burkholder et al. 121).

The polyphonic mass as realized by Guillaume de Machaut represents the first multi movement work in history—a history that is soon to be bursting with multi-movement works. Because of this, Machaut is one of the heavyweights in music history (Burkholder et al. 120).

A good chronology of giants so far goes something like this, Guido, Hildegard, Leonin, Perotin, Bernart, and now Guillaume.)

Following along with the ethos of the ars nova, some of Machaut’s long-form poetry featured interpolated musical interludes. In fact, he lived long enough to oversee the production of his life’s output into illuminated manuscripts. This made him one of the most well documented medieval musicians (Taruskin 290).

Franco, Vitry, and Machaut greatly influenced later generations of composers. Their masses motets, and chansons became the archetypes for the exquisitely refined acapella music that emerged in the Renaissance.

During the Renaissance, the musicians developed still another genre, the ars subtilior—the more subtle art.

One thought on “Motets, Measures, and the New Art”

My Tweets
Join 958 other subscribers