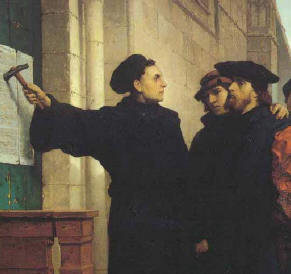 The Christians of Western Europe all belonged to one religious order during the Middle Ages. Today this order is called the Roman Catholic Church.

This Medieval epoch of spiritual unity began at the end of the third century CE when the Catholic Church condemned—and labeled as heterodox—Arianism, which was the last rival denomination of Catholicism (“Catholic Church” 6.1, par. 1; “Arianism” Origin, par. 2).

Because it was just one, thoroughly homogenized entity, the Church featured a limited variety of musical styles, forms, and techniques.

This one-point musical perspective held sway for a thousand years in Western Europe, but Catholicism’s monopoly on music was to be rivaled during the sixteenth century by a new denomination of Christianity called Protestantism.

Protestantism today includes the following sub-denominations: Calvinism, Anglicanism, Lutheranism, and others. Out of these sects, it was Lutheranism that came first, and Lutheranism was spearheaded by an Augustinian friar from Germany named Martin Luther (Langer 283).

In 1517, with the Renaissance spreading innovative ideas throughout Europe, a German priest published a critique of the Church that precipitated a schism, a war, and a movement known as the Protestant Reformation (Burkholder, Grout, and Palisca 215).

This change was brought about by the invention of the chorale, which was a liturgical piece that was meant to be sung by the congregation (Burkholder, Grout, and Palisca 216).

The chorale evolved because of the theological positions espoused by Martin Luther.

Luther (1483-1546), a professor at the University of Wittenberg, Germany, wrote a pamphlet called the Ninety-Five Theses in 1517, which was a list of complaints and grievances leveled at the Roman Catholic Church (Martin Luther” par. 1).

Most of his gripes were about theological matters, and none of the ninety-five theses were directly about music.

However, music was affected as a residual matter related to one of Luther’s primary grumbles. He was unsatisfied with the Church’s use of Latin for all worshiping purposes.  A more satisfactory approach, according to Luther, would be reading the bible and praying in one’s own language (Larousse 116).

Luther also thought that everyone should be able to sing along in church. The masses and motets in the Catholic tradition were too complex and difficult to be sung by the commoners, so professionals were needed to pull them off. The invention of the chorale offered a nonprofessionals’ alternative to liturgical song.

The chorale, with its simple melodic lines and straightforward delivery, embodied the spirit of the Reformation: the spiritual enfranchisement of the common people. (Burkholder, Grout, and Palisca 216).

In addition to being the conceptual progenitor of the style, Martin Luther was one of the style’s contributing composers.  He was responsible for some of the most famous chorales in the Lutheran tradition. Principal among these is Eine Feste Berg, “A Mighty Fortress” (Burkholder, Grout, and Palisca 218).

The Renaissance and Reformation spread north to England during the sixteenth century. There the famous king Henry VIII (1491-1547) separated from the Catholic Church to get a legal divorce in 1534. He established the Church of England (Anglicanism) in its place (Webster’s 665; “Church of England” par. 2).

The Church of England, like Lutheranism before it, eventually developed a new liturgy with new music. However, unlike in Germany, the Reformation in England was slow to change the ceremonial details of the Latin mass. Indeed, both Catholic and Anglican styles coexisted throughout the sixteenth century.

The principal Anglican style was the anthem, which was roughly comparable to the Lutheran chorale or Catholic motet (Larousse 145; Norton/Grove 127).

The most notable English composers of this time were Thomas Tallis (c.1505-1585) and William Byrd (c.1543-1623). Byrd was a student of Tallis, but the two operated more like colleagues.

In 1575, Queen Elizabeth, who was Henry VIII’s daughter, granted Byrd and Tallis a twenty-year monopoly on printed music and on manuscript paper. The two composers took advantage of their obscene good fortune by producing a collection of 34 motets later that same year (Norton/Grove 127).

The pair continued publishing throughout their lifetimes, earning a fair amount of fame and notoriety (Larousse 145).

Out of the two, Byrd is more renowned to musicologists, amongst whom he is sometimes called the “Father of English Music” (Norton/Grove 127).

Byrd’s notoriety is due in part to his stylistically thorough output: He produced prodigious amounts of music in nearly all available English styles, which included Protestant and Catholic sacred music and all modes of secular music (Larousse 148).

In addition to his mastery of polyphonic vocal music and small ensembles, Byrd was adept at writing for the keyboard instrument known as the virginal. A virginal is what the English called the harpsichord (Burkholder and Palisca 373; Norton/Grove 865).

The virginal/harpsichord operated with a mechanism that, when a key was pushed, a quill plucked a string affixed to a harp-like contraption. The sound was brilliant but without much sustain, rather like a guitar (Norton/Grove 865). 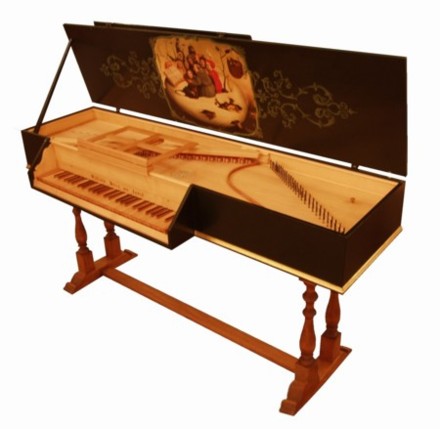 As a point of comparison, a piano has a mechanism that strikes a string instead of plucking it. This different configuration of machinery yields quite a distinctive character of sound.

One of Byrd’s masterpieces for the virginal is Pavana Lachrymae, which, when translated, roughly means, “Tear Song.” Lachrymae was written about 1609 and is based on a piece for solo lute by John Dowland (1563-1626), who was Byrd’s contemporary (Burkholder and Palisca 373).

The Reformation sparked huge religious wars throughout Europe in the sixteenth century. The most destructive of which was the Thirty-Years’ War, a conflict in central Europe that killed 8 million soldiers and civilians (“Thirty-Years’ War” para 1-5).

In comparison to such titanic struggles, music was a low priority. Even so, music was greatly affected by the Reformation.  The musical innovations made by William Byrd, Martin Luther, and many others of the Renaissance and Reformation paved the way for the next period in music history, the Baroque Period.

Taruskin, Richard. Music from the Earliest Notations to the Sixteenth Century. New York: Oxford UP, 2010.

Here’s a riff derived from a study by Barry Galbraith. There were a trillion ways to finger this exercise, but I settled on what I thought to be the most straightforward.
My Tweets
Loading Comments...
Comment
×
<span>%d</span> bloggers like this: